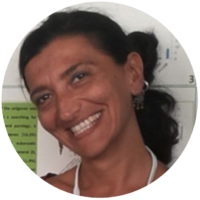 Professor of Genetics at the University of Napoli Federico II (Italy), in 1997 she received a PhD in Molecular Systematics at the University of Napoli Federico II. The study of the molecular mechanisms involved in floral development and symmetry of orchids is at the core of her research interests. In addition, her scientific interests include the study of the molecular evolution of plant homeotic genes, population genetics and genomics of plant and insect species, biomonitoring of aquatic environments through biomarkers and molecular identification of pathogens. She is member of the AGI (Italian Genetics Association), where she was member of the Board from 2014 to 2016. She is Academic editor of “Plos One” and Review editor in Evolutionary and Population Genetics of “Frontiers in Ecology and Evolution”, “Frontiers in Genetics” and “Frontiers in Plant Science”.