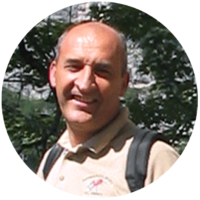 He received a Ph.D. in Agricultural Entomology at the University of Bologna in 1990. Then he became researcher and then Full Professor of General and Applied Entomology at the University of Padova. Visiting Scientist at the Department of Pure and Applied Ecology, University of Amsterdam (The Netherlands) from 1986 to 1991. From 1996 to 2000 he acted as Consultant and adviser of Environment Italian Minister. Convenor of the IOBC/WPRS Working Group “IPM in viticulture” since 2015. Main research topics: Biological control and Integrated Pest Management of arthropod pests; biology and ecology of predatory mites (Acari Phytoseiidae); side effects of pesticides on beneficials; resistance to pesticides in phytophagous and predatory mites; functional biodiversity in viticulture. Member of the Editorial Board of Experimental and Applied Acarology, Acarologia, and Insects.