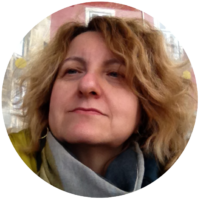 Professor of Inorganic Chemistry at the University of Napoli Federico II (Italy), she received a PhD in Chemical Sciences in 1990. In the same year, she was tenured as research associate at the Department of Chemistry, and then promoted to associate and full professor. She spent numerous sabbatical periods in the United Stated: she was visiting scientist at DuPont Merck Pharmaceutical Company, Wilmington (1995-1996), at the University of Pennsylvania (1997), and at the University of California, San Francisco (2013). Her researches mainly focus on the structure/function relationships of metalloproteins and metalloenzymes. Synthetic models of heme- , diiron-oxo- and iron-sulfur proteins have been successfully engineered using a minimalist and/or a de novo design strategy. Such approaches have allowed the construction of functional molecules, able to catalyze oxidation, oxygenation and hydrogen evolution reaction, thus useful for environmental, biotechnological and medical applications.