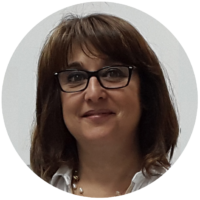 CNR researcher at the Institute of Biostructures and Bioimaging of Naples, she graduated in Industrial Chemistry in 1989, at the University of Naples Federico II, and obtained a PhD in Chemical Sciences in 1993. In 1998 she was visiting scientist at the National Institute of Medical Research in London. Her research activity is mainly focus on the design, synthesis, structural and functional characterization of bioactive peptides, protein and metalloprotein models. As part of this research activity, functional models of different classes of natural metalloproteins and metalloenzymes have been developed, such as heme-, iron-sulfur and diiron-oxo proteins. The structural and functional characterization of these compounds has highlighted their usefulness in the development of new biomaterials, such as catalysts and sensors, for applications in different fields, such as environmental, biotechnology and medical.