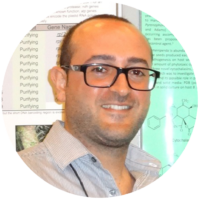 Fixed term researcher (RtdA) of Organic Chemistry at University of Naples Federico II (UNINA), in 2013 he received a PhD in Agrobiology and Agrochemistry at the same University and he performed 6 months of his research activity at New Mexico Institute of Mining and Technology, Socorro, NM, USA. Successively, he was awarded a one-year post-doctoral position at Brigham Young University, Provo, UT, USA and one-year at UNINA. Then, he worked for three years as researcher at Biotechnology and Biological Control Agency, BBCA, Rome, Italy. In 2018 he was awarded a post-doctoral position as principal investigator of a project STAR 2017 at UNINA. He has acquired over 12 years of experience mainly in organic chemistry, spectroscopy and hemisynthesis of bioactive metabolites produced by fungi, bacteria and plants. He is co-author of 118 scientific publications on international journals (H-index 19 and 982 citations) and several communications at national and international congresses.