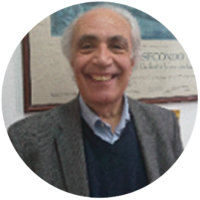 Professor of Agricultural Chemistry, University of Naples Federico II, and Honorary Professor at the Agricultural University of Prague (Cz) and Nanjing (PRC). He received his Laurea in Chemistry at the University of Rome (1975) and in Agronomy (1979) at the University of Illinois (USA). He studies the molecular structure and dynamics of soil organic matter and its influence on plants. He was awarded the Alexander von Humboldt Prize in chemistry (1999) by the von Humboldt Foundation, Bonn (DE) and the Doctorate Honoris Causa (2009) by the Life Sciences University of Prague. He was President (1995-1997) of the Mediterranean Association of Environmental Protection and of the Soil Chemistry Division of the International Union of Soil Sciences. He is Chief-Editor of the Springer-Nature Journal “Chemical and Biological Technologies in Agriculture”. He has a H-index (Google Scholar) of 69 and the PlosBiology journal places him among the 100.000 most influential scientists in the world.